This sculpture is said to be the translation of a dream experienced by Mrs. Dodge on the three nights preceding her death in 1916. According to the legend, Mrs. Dodge told her daughters of the dream wherein she was on a rocky shore and saw a small boat approach through the mist. At the front of the boat, a beautiful angel held a small bowl and spoke softly, encouraging Mrs. Dodge to take a drink. The vision came three times to Mrs. Dodge, and on the third night, she took a sip. She told her daughters that after she took the drink, she felt “transformed into a new and glorious spiritual being.” She died soon after.

Her daughters commissioned French to create a memorial based on her description of this dream. The statue was dedicated in 1920, depicting a winged angel with one arm outstretched and the other holding a vessel from which water flows.

The monument and surroundings were restored in 1984. The National Park Service has this memorial on the Register of National Historic Places. 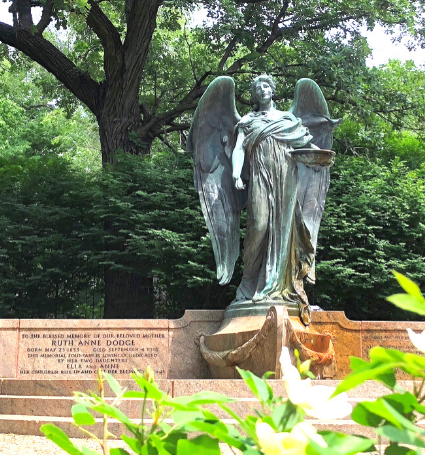