In 1824 St. Louis businessman, Francois Guittar, established the first white settlement on the western boundary of Iowa Territory, naming it Traders Point. Guittar was engaged in fur trading and other mercantile pursuits with various local Indian tribes throughout the area, exchanging hides of deer, elk, buffalo, and other furs for ammunition and dry goods.

Billy Caldwell was the son of a Potawatomi Indian mother and a Scots-Irish immigrant father. Caldwell became known as Chief Sauganash of the Potawatomi Indian band. In 1829 and 1833, he negotiated treaties with the United States on behalf of the Indian Nations of Potawatomi, Chippewa, and Ottawa. Caldwell served as a commissioned Captain in the Canadian Indian Department during the War of 1812, after which he moved to the United States, ultimately settling near Traders Point.

The famed Jesuit missionary priest, Father Pierre-Jean De Smet, passed through the area in 1838, and he was responsible for setting up the first church and school in the settlement. Because of the coexistence of an active trading outpost and an established friendly relationship with local Indian tribes, Traders Point became the desired destination to cross the Missouri River for a multitude of pioneers working their way to the western United States on the Oregon, the California, the Mormon, or the Lewis and Clark trails.

On December 28, 1846, Iowa became the 29th state in the Union, and the growing southwest Iowa town once known as Traders Point was renamed Kanesville, after Thomas L. Kane. Kane helped negotiate federal permission for the Mormons to use Indian land along the Missouri River for their winter encampment of 1846-47. Here, Mormon leader Brigham Young sustained as the second prophet and president of The Church of Jesus Christ of Latter-day Saints in the Kanesville Tabernacle. 200 Mormon pioneers built the Kanesville Tabernacle in just two and a half weeks. In 1848, Brigham Young succeeded in getting the first Post Office opened in Kanesville.

By 1852 many Mormon settlers had decided to move west to Utah. The town was renamed Council Bluffs after a site approximately 20 miles to its north where the Lewis and Clark Expedition members had sat in council with the Otoe Tribe on bluffs near the Missouri River. One year later, Cornelius Voorhis was elected as the first Mayor of Council Bluffs.

In 1853, Grenville M. Dodge took charge of a crew surveying central Iowa to find a terminus for the Rock Island Railroad on the Missouri River. Dodge chose Council Bluffs, and in 1855, he settled his family here. Dodge and his brother created a banking house that merged into the Pacific National Bank. In 1858, Dodge met an Illinois railroad lawyer named Abraham Lincoln, whom railroad financier, Thomas Durant, had hired to work in Iowa, where Dodge was engaged in surveying. Upon meeting, Lincoln and Dodge shared their mutual interest in establishing a transcontinental rail route through the Midwest to the Pacific Ocean. They met again in 1859 when Lincoln visited Council Bluffs to deliver a campaign speech.

By January of 1861, Lincoln had assumed Presidential office, but Congressional support for him was sharply divided between our northern states ("Free") and southern states ("Slave"). Two early legislative attempts to establish a transcontinental railroad in the middle of the country failed due to opposition from those southern states who had proposed an alternative southern route. After the southern states seceded from the Union, both houses of Congress quickly approved the "Pacific Railroad Act of 1862" that Lincoln signed into law on July 1, 1862.

The Pacific Railroad Act of 1862 set forth a plan to build a 1,907-mile continuous railroad line constructed between 1863 and 1869 across the western United States to connect the San Francisco Bay area with Omaha, Nebraska. The Central Pacific Railroad would start immediately in San Francisco, building their rail line from the west toward the east until connecting with the Union Pacific Railroad, working from Omaha Westward. Capital investment of over $100,000 (about $2.6 billion today) was needed to accomplish this task.

The Union Pacific Railroad did not start its construction until July 1865 due to difficulties obtaining necessary financial backing and the unavailability of workers and materials due to the ongoing civil war. One of the few early Union Pacific subscribers was Brigham Young, who also supplied crews for building much of the railroad through Utah.

After he retired from the Army, Durant hired Dodge to be the Union Pacific's chief construction engineer. Dodge provided proven leadership strength to the project because of his military background, having achieved the rank of general in the Union Army during the Civil War. After construction, the new Union Pacific line began heading west from Omaha. Still, it didn't directly connect to the previously existing rail network in the Eastern United States, ending at Council Bluffs. Initial plans called for train passengers to disembark and join the two rail lines by ferry boat. The Union Pacific attempted to run its freight trains across the frozen river during the winter for a while. The first railroad bridge connecting the Transcontinental Railroad to the eastern United States opened on March 25, 1873. That bridge has since been rebuilt twice, with the current bridge opening in 1916.

Council Bluffs opened the Squirrel Cage jail in 1867 and completed the construction of a two-story Courthouse the following year in 1868. In 1870, Iowa School for the Deaf opened its doors in Council Bluffs. The first Council Bluffs fire department was formed in 1883. In 1883, Joseph Lemen founded The Christian Home (Children's Square USA.) In 1886 Council Bluffs became the second city in the US to have electric trolleys. In 1887, the Sisters of Mercy founded St. Bernard's Hospital in Council Bluffs. 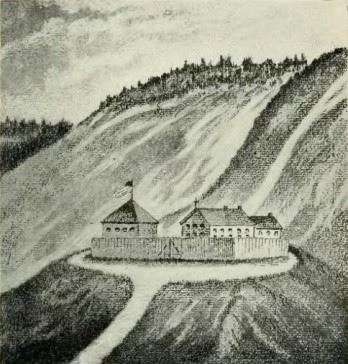 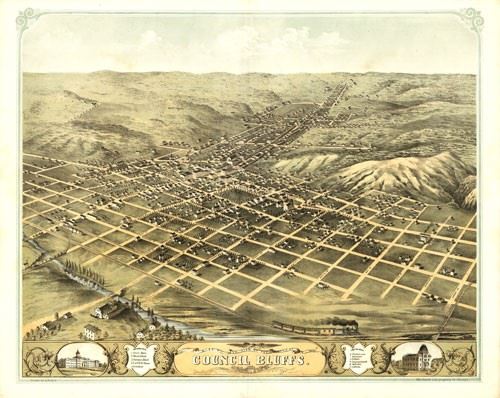 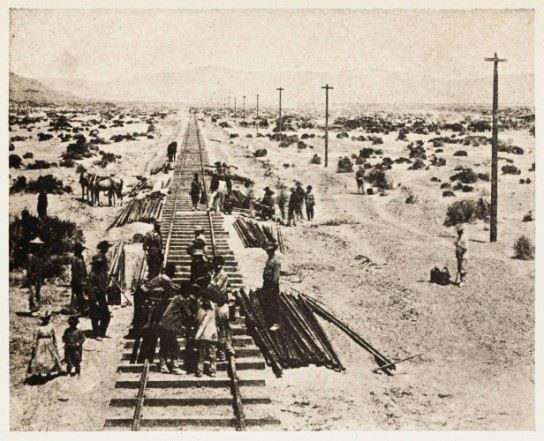